Family Run Business est 1996
Call us 020 - 8994 - 4567
Quick Contact form
inc vat ex vat
£
basket£0.000
0
MenuX
Contact Us
Our web site uses cookies so you can place orders and we can provide a better service. Continue to use the site as normal if you're happy with this, or find how to manage cookies. OK, got it 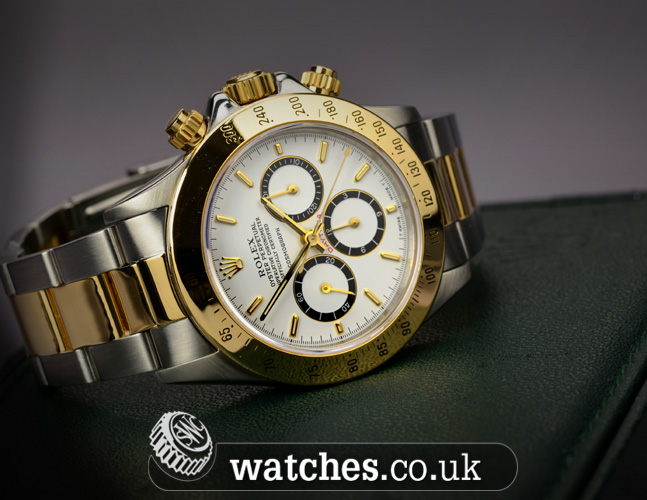 Rolex Cosmograph / DaytonaYear of inception: First Introduced in 1960, model 6239 was the first Rolex Cosmograph. A year later, a second model 6241 was also released. Cosmetic features that differ between these two early models was that while the model 6239 sported a solid steel bezel, the model 6241 had a steel ring fitted with clear acrylic insert. As for the dial is options, all early Cosmograph models were available in the following two dials:Standard Dials: The standard dials were either black with silver registers or silver with black registers.Exotic Dials: The exotic dials were available in either black with white sub dials or cream white with black sub dials. This created an interesting contrast not found in other Rolex modelsThe Rolex Cosmograph has a stopwatch facility. This model has a separate second hand which is started, stopped, and reset to zero via the pushers on the side of the case. Considered by many as one of the most popular and sought after Rolex sport models ever made, the Rolex Cosmograph "Daytona" is truly exceptional. The term Cosmograph was coined by Rolex when it decided to come out with an improved version of its earlier line of chronograph watches. Today, Rolex Daytona has become synonymous with motor sports and class. Rolex Cosmograph also known as the Paul Newman and DaytonaThe iconic movie star Paul Newman was seen wearing a Rolex Cosmograph with an exotic dial on and off the movie set. Later, he was seen sporting the Rolex Daytona in movie posters and some popular European magazines as he was very proud of his Cosmograph collection. Naturally this publicity fueled the popularity of all versions of the Cosmograph with there contrasting sub dials (having square markers within), and they became affectionately known as Paul Newmans. This Rolex model was already an instant hit in the racing scene due to their usefulness in calculating the average lap speed. This naturally resulted in a huge publicity windfall for Rolex and the Cosmograph.The model is also popularly known as the Daytona after the world famous Daytona Beach in Florida which had been the home of sports car racing and testing for over a hundred years, which Rolex have and still sponsor to this day.Cosmograph / Daytona model numbers.6239, 6240, 6241, 6239, 6240, 6241, 6262, 6263, 6264, 6265, 6240, 6241, 16518, 16519, 16520, 16523, 16528, 16568, 116505,116509, 116518, 116519, 116520, 116523, 116528, 116568, 116589, 116598, 116599Looking to Buy or Sell a Rolex Daytona/Cosmograph? Contact Us - www.watches.co.uk
[filename] 0%