Fit for a Prince, A Spy and Everyone in Between: The Enduring Popularity of the Omega Seamaster Professional

Fit for a Prince, A Spy and Everyone in Between: The Enduring Popularity of the Omega Seamaster Professional

Unquestionably one of the most well known watch designs in the world, this classic design has remained popular and is still one of the watches that we sell here at www.watches.co.uk with most regularity, they come into stock and within only a week or so the watch will be sold again.

What is it about this watch that keeps people coming back, again and again? Two reasons that spring to mind are a famous British Prince and a famous British Spy! The watch has gained attention over the years after being spotted numerous times on the wrist of Prince William, who only seems to wear this particular watch, even though he has no official association with the brand. The watch is believed to be a gift from his mother Diana Princess of Wales.

Not only that, the watch is commonly known as the James Bond watch after the blue dial Omega featured heavily in the James Bond films GoldenEye, Tomorrow Never Dies, The World is Not Enough and Die Another Day. Not surprising as Omega have been associated with the James Bond film franchise for decades now, and the sighting of these watches in the films have really boosted their popularity over the years.

With design touches clearly inspired by the Rolex Submariner, the Omega Seamaster Professional manages to combine sporty and functional diving capability yet still looking great at almost any event or function (notice how great is looks when James Bond or Prince William wears it with a suit). Notice also how the Omega wave motif pattern, an amazing design touch, catches your eye from almost any angle with a slight reflective sheen. 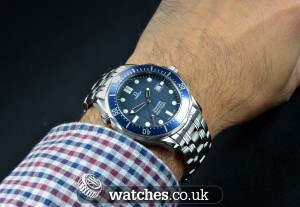 The skeleton hands, wave motif, pared back dial, and 12-sided unidirectional rotating bezel with polished ring and engraved with graduated scale usable for the calculation of diving time, really make it stand out.

The most popular variations are the Omega 2531.80.00 with Automatic Chronometer or the 2541.80.00 Quartz model. Here at www.watches.co.uk we believe the popularity is down to its universal appeal across all ages, and a great gift for fans of the Omega brand. A great gift for milestone birthdays, weddings and graduations.

The post Fit for a Prince, A Spy and Everyone in Between: The Enduring Popularity of the Omega Seamaster Professional appeared first on Watches.co.uk.