Historic Timepieces & The Celebrities That Wear Them

Historic Timepieces
and the Celebrities Who Wear Them

Watches are incredible. Not only are they excellent physical representations of human innovation and precision, their designs are some of the sharpest pieces of luxury on the planet. The second a person is spotted wearing a luxury watch, curiosity about them spikes. People dont simply stumble across a fine timepiece. Some buy watches with money. Some buy watches with sheer greatness.

Here are a few such stories, about some of the worlds most powerful and famous people and the watch brands that keep their time. 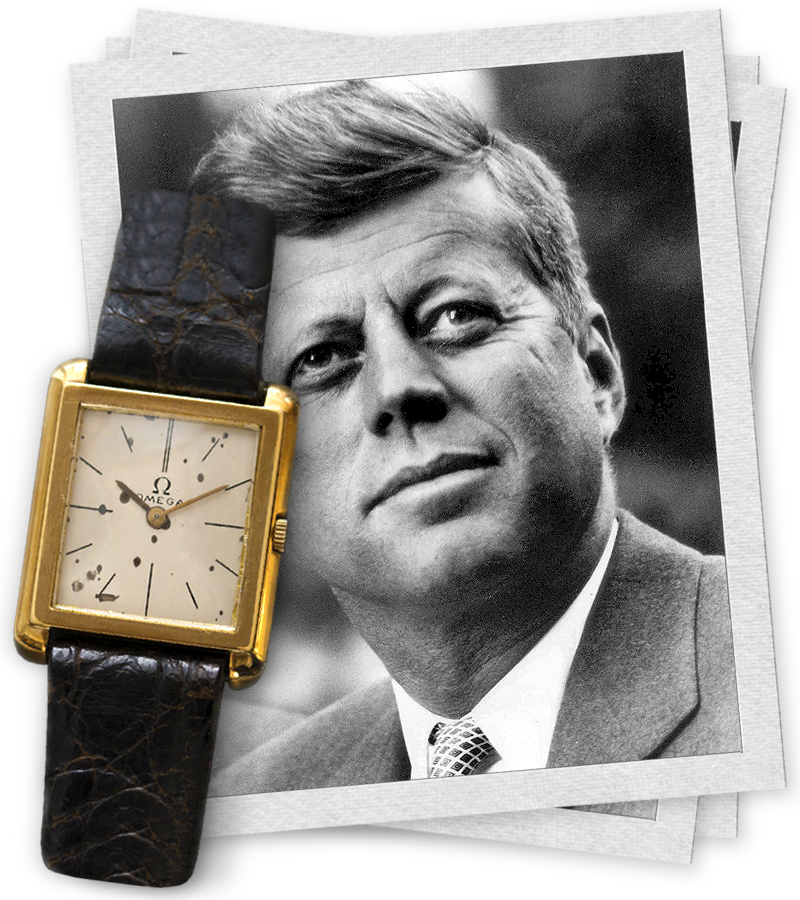 John F Kennedy famously wore the Omega Ultra-Thin wristwatch at his inauguration ceremony in 1961. It was given to him as a gift by his friend Grant Stockdale in 1960, a year before he became president. Stockdale had so much faith in JFKs ambitions that he had President of the United States engraved into the caseback, even though the man was yet to be elected. Nicknamed the Stockdale watch, First Lady Jacqueline Kennedy described it as the thinnest most elegant wristwatch in her thanks you letter to Stockdale.
‍
Elvis Presley was gifted a white gold Omega in 1961, by RCA Records, to commemorate his milestone of selling 75 million records worldwide. This historical timepiece was later sold at auction for 1.5 million Swiss francs, setting the record for the most expensive Omega watch ever sold at auction. Elvis also wore an Omega Seamaster during his 2-year stint in the US Army.

Sir Winston Churchill was gifted a Rolex Datejust by Hans Wilsdorf, the founder of Rolex, in 1947. The watch was the 100,000th Rolex chronometer and Wilsdorf decided that it should adorn the wrist of an exceptional person.  Crafted from 18 karat gold, this historical timepiece featured a personalised coat of arms, a Perpetual self-winding chronometer, a waterproof Oyster case and was the first of its kind to display the date as well as the time.
‍
Rolex describes Dr. Martin Luther King Jr. as one of the greatest heroes in their history. With the companys blatant and consistent support for the Allied forces in the Second World War, even though their country was declared neutral and surrounded by Nazi-occupied land at all borders, perhaps they saw a kindred spirit in Dr. Kings fight against oppression. Dr. King wore a Rolex Datejust throughout his life. The timepiece featured yellow gold, a champagne dial and a fluted bezel on a Jubilee bracelet. He was the youngest person to ever win the Nobel Peace Prize, at age 35, and is arguably the most influential man to ever wear a Rolex watch. 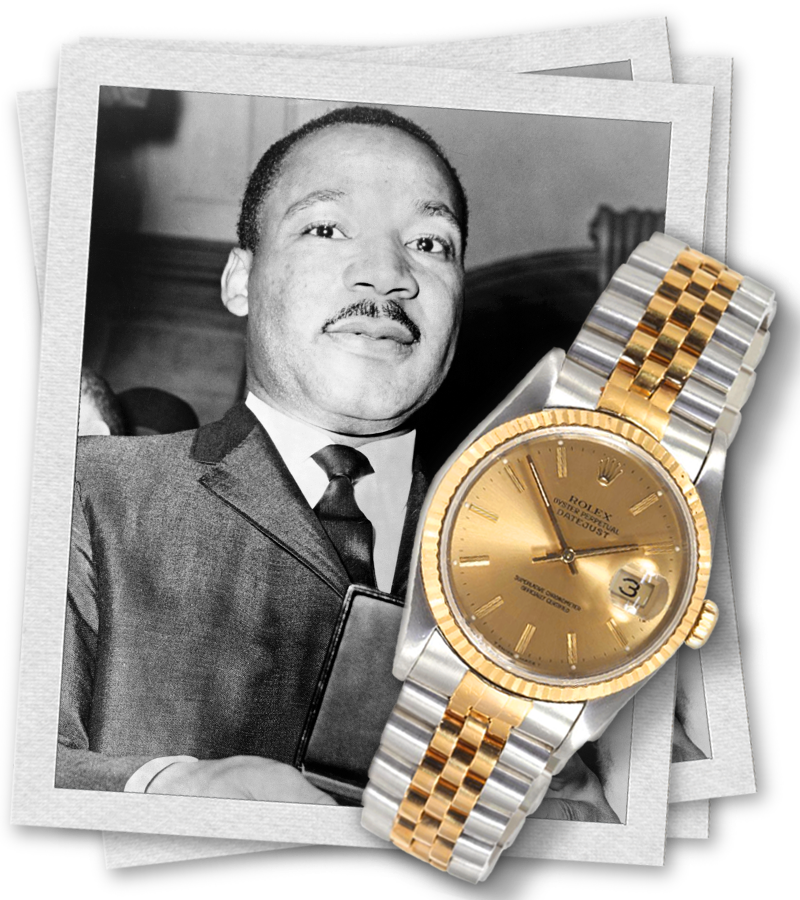 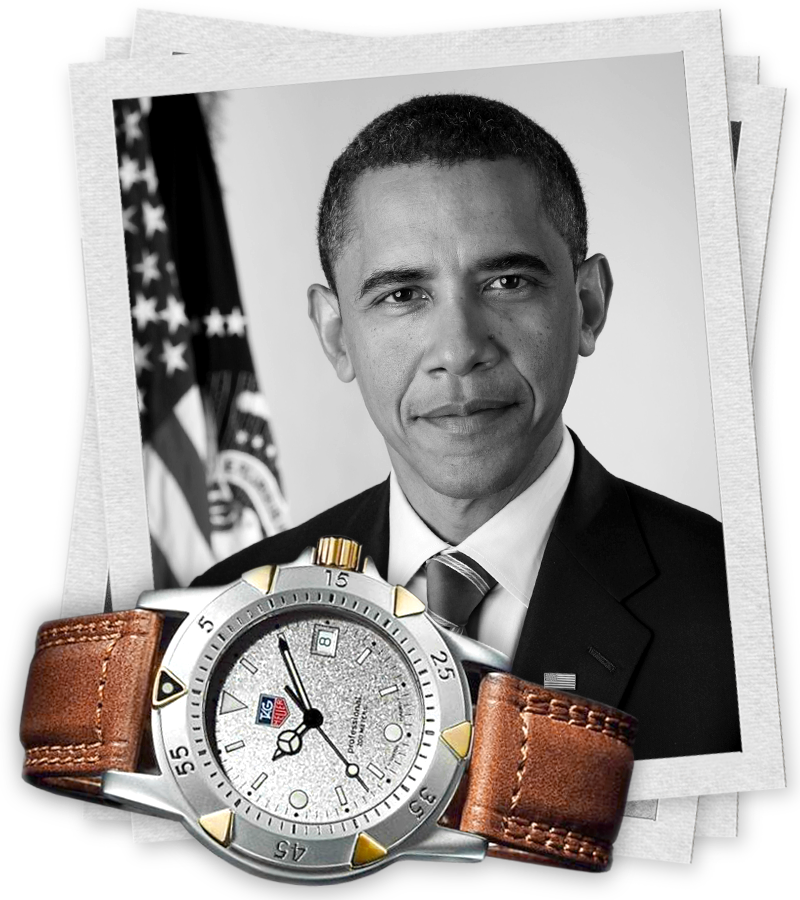 TAG Heuer is a truly remarkable and one of a kind company that are known for their ongoing commitment to innovation in watchmaking. Barack Obama is a true known lover of TAG Heuer watches, particularly the TAG Heuer 1500 model. Although it was quietly phased out in 1998 there was a definite spark of interest when the former President of America was seen wearing one during the build up to his campaign.
‍
Introduced back in 1969 was the TAG Heuer Monaco, one of the most well-known TAG Heuer watches in their range, worn by Steve McQueen in the strongly influential film Le Mans.

The design was considered to be incredibly innovative at the time of its release and the fact the design has barely changed since then is the ultimate testament to that fact.

John Travolta is widely recognised to be an ambassador for the Breitling luxury watch brand. Hes been spotted wearing the timepieces in advertisements and even on the red carpet.

‍Breitling watches are synonymous with class and sophistication; worn exclusively by gentlemen. Travoltas watch of choice is the Breitling Navitimer, a true aviation watch that were sure goes nicely with his private jet.
‍
Harrison Ford also wears Breitling watches, preferring the Breitling Aerospace timepiece. This Aerospace model provides a rugged elegance that is a little more understated than your classically luxurious wristwatches, but classy nonetheless. 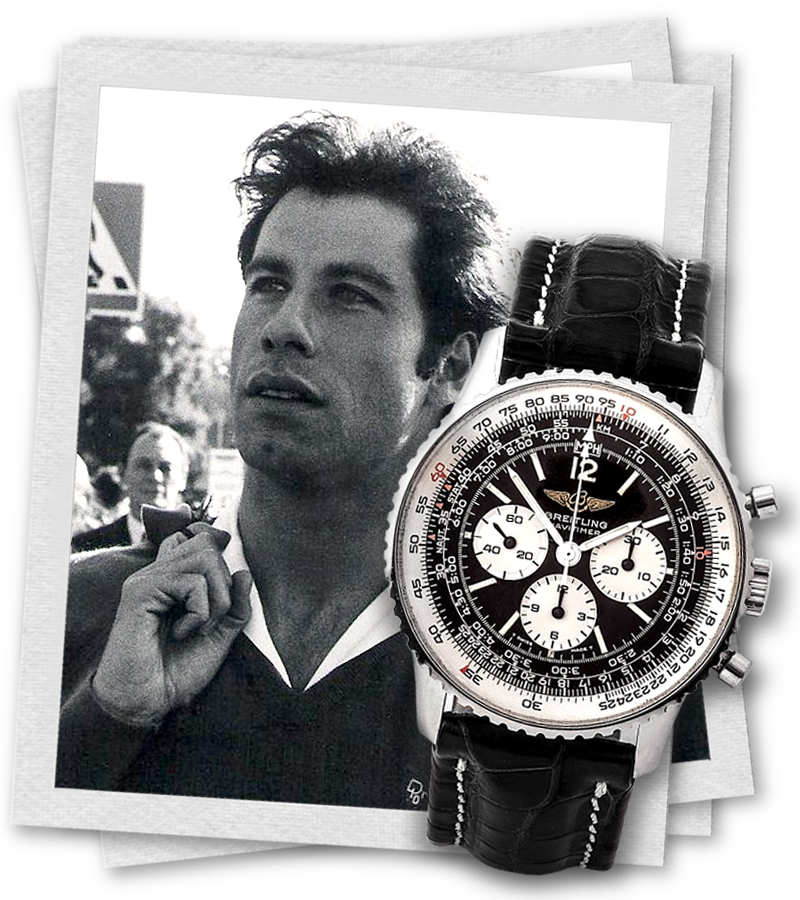 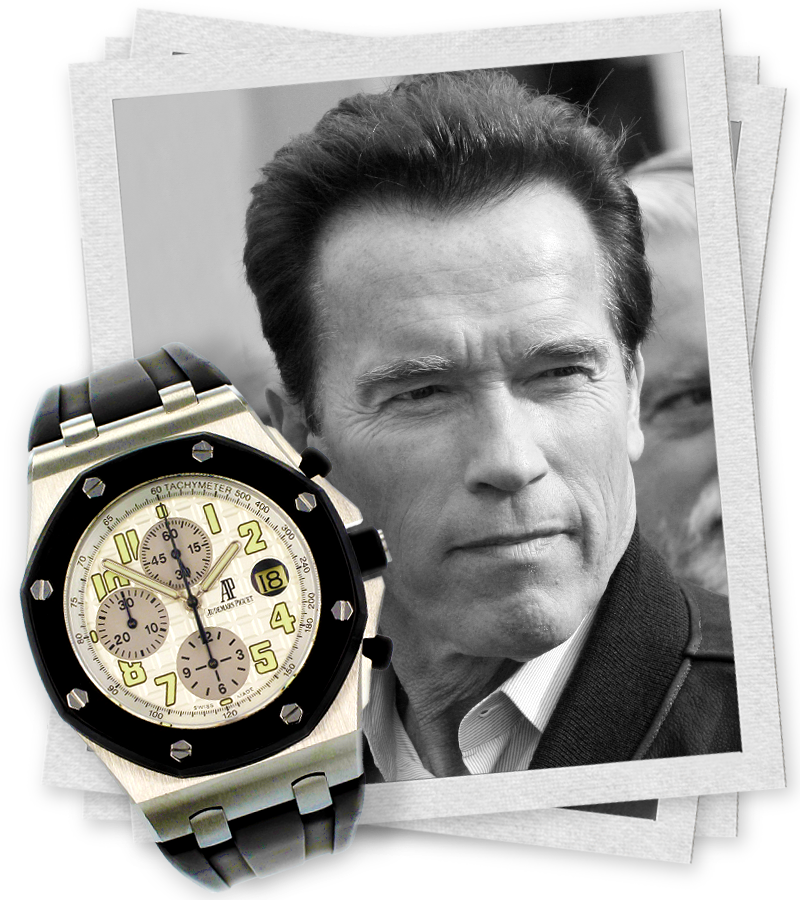 In 1972, Audemars Piguet released the Royal Oak: the unusually large timepiece with a unique octagonal bezel held in place by exposed screws. The design was conceptualised in less than 24 hours and due to its massive (for the time) size and unconventional shape, it seemed that its relevance wouldnt exceed the time it took to design it.

Flash forward to today and the timepiece initially nicknamed Jumbo now adorns some of the worlds biggest stars in Jay-Z, Michael Schumacher, Arnold Schwarzenegger and LeBron James; all known for being larger than life and redefining their respective industries. No wonder they sport the Royal Oak.

Some of the most famous and iconic Cartier watch designs come from the Tank collection. Designed in 1919 and echoing the design of a First World War tank, over the years these timepieces have found their way to the wrists of some incredibly influential people.
‍
Princess Diana owned two versions of the iconic watch: an all-gold Tank Francaise and a Tank Louis Cartier. She wore them regularly and is considered one of the most famous and influential people to ever wear a Tank watch.

Andy Warhol was obsessed with his Tank Solo in 18 karat yellow gold, with black roman numerals on a white dial, even opting to feature the watch in his self portrait. He famously said of his Tank watch I dont wear a Tank watch to tell the time. In fact, I never wind it. I wear a Tank because its the watch to wear. What else can be said? 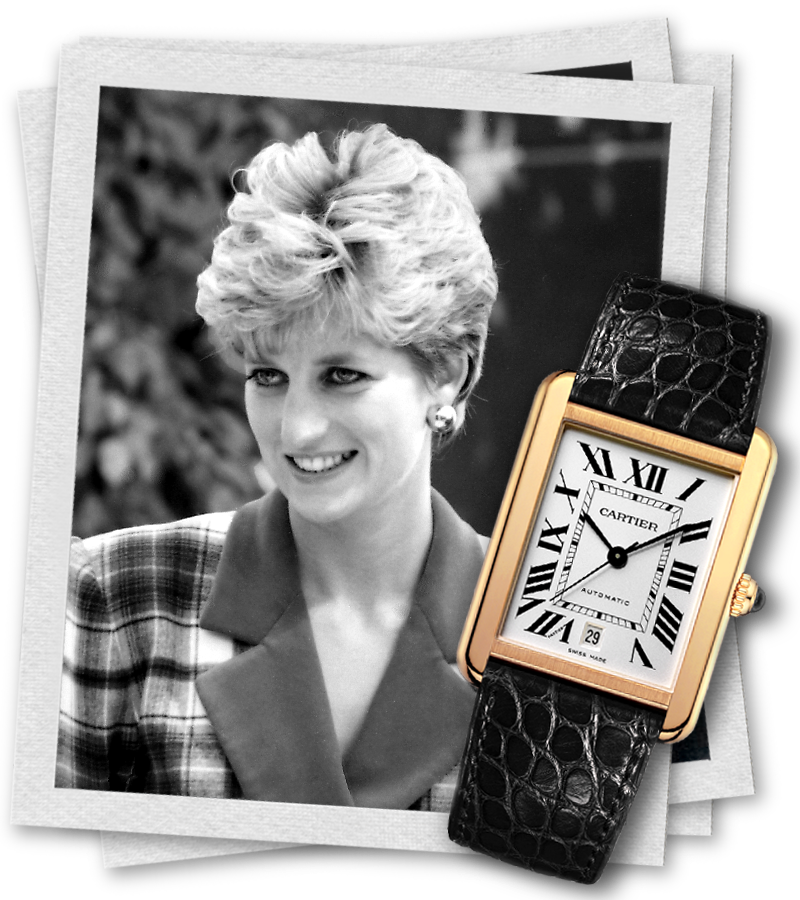 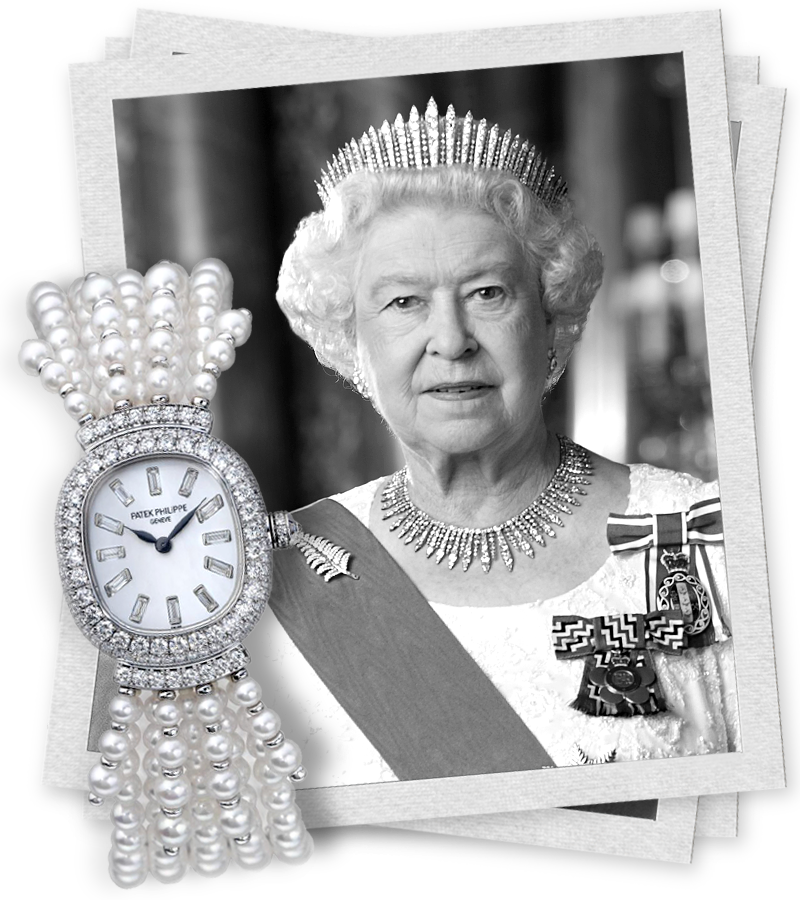 Patek Philippes run as one of the worlds top luxury watch brands can be largely credited to the Royal Family. When the firm was originally founded in 1851, the two founding members brought a selection of their new watches to the Great Exhibition in London, where Queen Victoria and Prince Albert both bought watches from them. European royalty soon followed Victorias example with the Habsburgs, the Romanovs, the royal families of Spain, Sweden, Bulgaria, Portugal, Serbia and Italy all soon began wearing Patek Philippe watches.

Over 160 years later, the connection between Patek Philippe and the British royal family is still intact with Queen Elizabeth II owning and wearing a pearl and diamond encrusted Patek Philippe timepiece.

IWC feels that they dont need brand ambassadors, feeling their innovative craftsmanship and reputation for the highest quality are enough to keep them at the top of the luxury watch business. And theyre right. IWC watches are the pinnacle of well-made, quality craftsmanship, design and innovation.

When celebrities like Ewan McGregor and Keith Richards are seen wearing an IWC timepiece, it reflects well on them.  It identifies their keen eye for the finer things and demonstrates their impeccable taste.

IWC knows it makes great watches. People with great taste know it too. 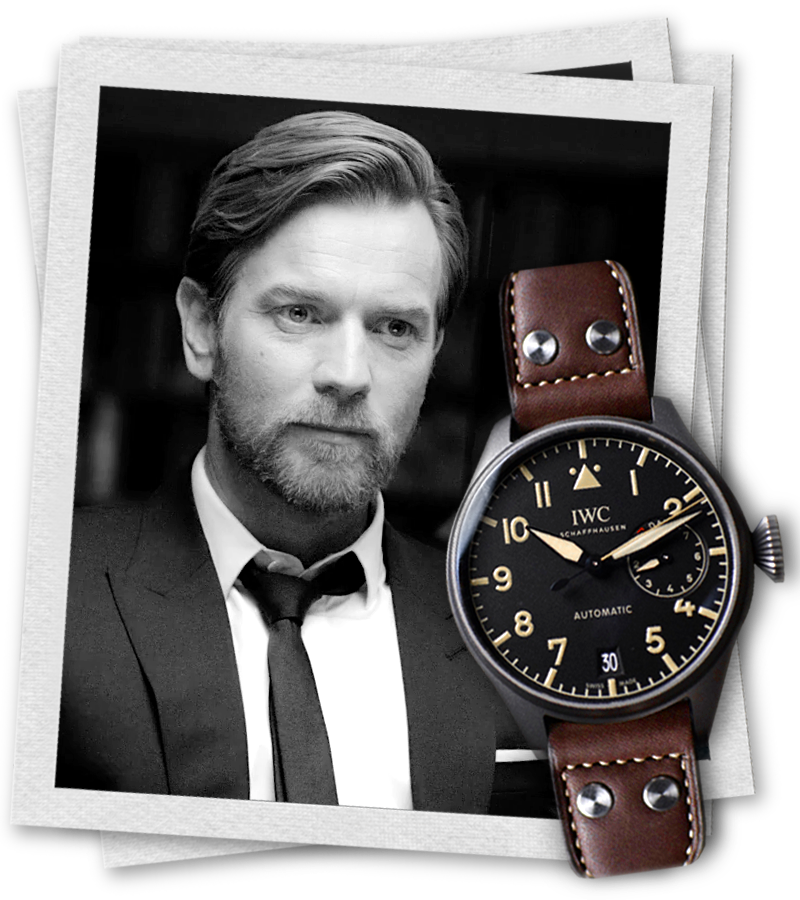 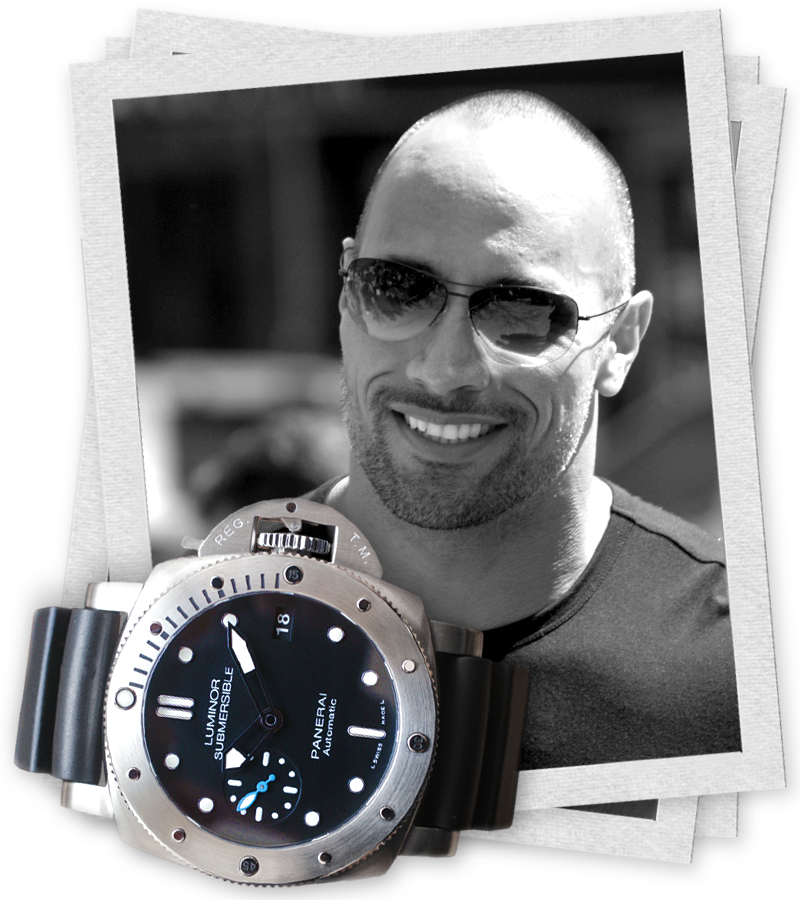 When Rocky strikes it rich after the events of the first film, he famously takes Adrian on a shopping spree and asks her Do you like having a good time? Then you need a good watch., as she slowly realises that she too, deserves nice things.

Apparently, Sylvester Stallone likes having the best time as he has been a huge advocate for Panerai timepieces ever since he spotted a Luminor in Rome in 1995 and bought it right away.

Since then, other prominent action stars like Dwayne Johnson and Jason Statham have been spotted sporting Panerai watches.

Classic, iconic and timeless, Jaeger LeCoultre timepieces are the epitome of confidence and class.

While one of the most famous Jaeger LeCoultre watches is the 34.5 mm Memovox presented to Charlie Chaplin in 1953 by the Swiss canton of Vaud, todays Hollywood heavyweights, including Leo DiCaprio, Matt Damon, Jamie Foxx, Pearce Brosnan and Christian Bale have all been spotted with Jaeger LeCoultre on their wrists when they are aiming to look their best. 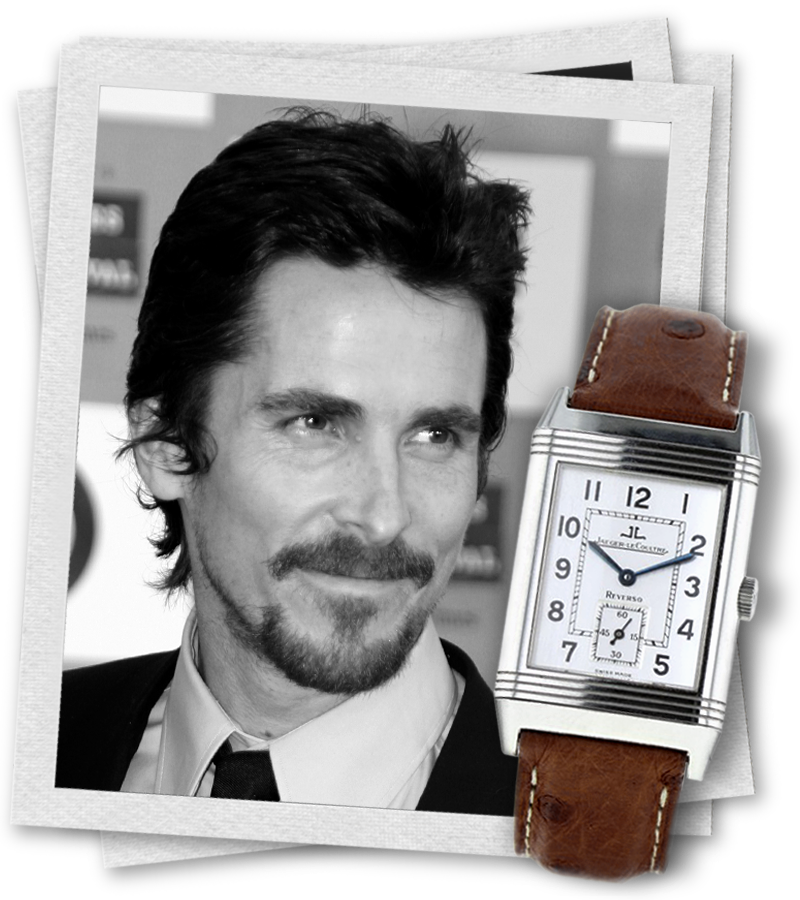 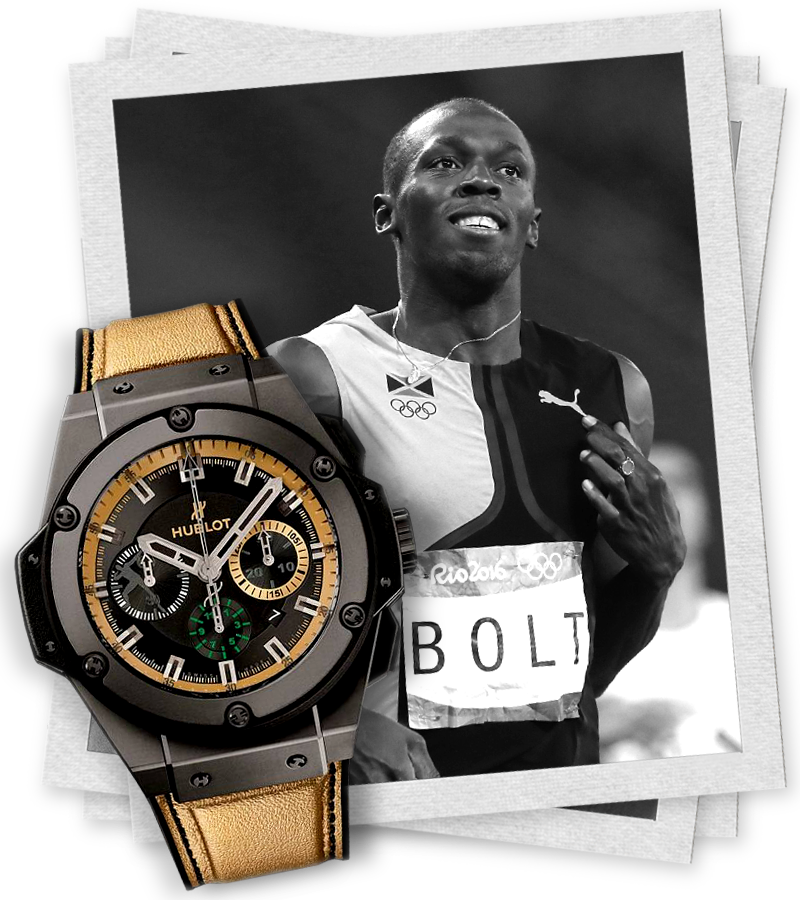 While most luxury timepieces are worn by those who achieve great things, some luxury watches are inspired by greatness themselves. Take the King Power Usain Bolt from Hublot, inspired by the one and only Usain Breaks World Records For Breakfast Bolt. This watch features a black dial with black nickel-plated hands, housed in a black ceramic case. The strap combines black leather and the same gold leather used in Usain Bolts iconic running shoes. With only 250 of them produced, this is one of the most exclusive Hublot watches.

Keeping with great feats of athleticism, Hublot celebrated New York Yankee legend Alex Rodriguezs 600th home run in 2010 by presenting him with the one-of-a-kind Big Bang - the King Power Black Magic, whose main colour scheme matches the colour of the Yankees. The only way this watch could be sharper is if it wore pinstripes. Only 500 of the limited edition watches were ever made.